This post was written on January 12, 2014, long before I ever had this blog. It was written and saved on my computer for all this time. I believe this is the time to post it. At the time of this posting, my dear husband Bernd and I have actually been married almost 13 years.

This is a story about a young lady from many years ago.  A young lady and her relationship issues. The girl mentioned in this story is me. This morning, during an incredibly amazing church service, I felt a strong tug in my spirit to share my story. It’s a story I rarely share, but one I feel strongly compelled to share now.

I was 18 years old, the age my parents had said I could finally date. My parents had this “rule,” you see, we weren’t allowed to date until 18 years old.  My birthday was in July, but it wasn’t until January that I met “the” guy. I had been invited by a friend to go to a College and Career group at another church in a nearby city, and our church had nothing like that, so I decided to go. The group was going to a praise and worship concert/event in the next city.

I noticed “the guy,” who will remain nameless, as soon as he got to the church. We ended up being in the same car for the car ride to Winnipeg and ended up talking the entire drive to and from Winnipeg. I learned he was a year older than me, he was going to College, and that his family went to the church that the group was a part of. I thought, great, this means he’s a great guy. Right?

I really liked him pretty much right away, but I kind of figured I didn’t have a chance. I had this little thing, called insecurity going on, big time. After all, all my other friend’s in youth group had always had some guy interested in them. Not me. So I left it that.

The following week, my friend invited me for a sleepover at her house (in said city) and I said I would come to the College and Career event that was at YFC, knowing all along that “the guy” would be there. I didn’t tell my parents. We ended up playing ping pong all evening.  The next week, my friend called me to tell me that he had asked her for my phone number. So, I was really excited, but nervous because I hadn’t told my parents about this guy, they might answer the phone when he called, and I’d never had a guy call me before, so they would definitely ask questions. He did call, and one of them did answer, but they did let me talk to him. He asked me out. Then came the embarrassing part…I had to ask permission. Questions, galore of course. They did say yes.

Of course, my Dad had “the” talk with him, later on about how to treat me, etc, etc. This guy was a REALLY nice guy, he had similar values, in that he believed in saving sex until marriage, etc. I went to his family’s house a lot, and I absolutely loved his family and they loved me, I fit right in, it was never awkward. One thing, though, that my Dad warned me from the beginning was that we didn’t believe the same things about God. His church was a different denomination than mine was.  I understood what Dad said because I had some doubt myself when I let my mind wander toward getting married.  He would come to my church (pretty much every Sunday) and stand with his hands in his pockets during worship.  My Dad always said that once you have tasted of the Holy Spirit led life, you will never be the same and that you can try but you will never be totally satisfied if you do walk away from it.

We got pretty serious, fairly quickly.  Last minute, (like two weeks before it started) I felt the tug in my heart to go to Bible School. At that time EVERYBODY  was going to this particular Bible College. So I went. It was the worst year of my life (but that’s a whole different story), but some good did come out of it.

“The guy” and I talked on the phone all the time. I went back home a lot. When I was home for Christmas, we got engaged and I went back with a ring on my finger. Interesting note, though, I hesitated when he asked me because I had doubt in my heart.  Somehow through our whole relationship, someone must have told the leadership of the college that he was bad news or something (I have never known who or why and that doesn’t matter now) because I got pulled into leadership’s office a couple of times regarding this. “The guy” came to visit me, I think in the spring, and that made stuff with leadership way worse. Also really not sure why. I finally got pulled into the office in early March and told I had to make a choice, him or school. They would kick me out if I didn’t.

I choose to break up with him, but that had zero to do with them because at that point I had no desire to listen to them.  I liked it there that much. (Please note the sarcasm)  I went home and told him in person because I wasn’t cruel enough to do it over the phone and because I intended to quit Bible School. (Side note:  My Mom did talk me into going back)

I cried and I cried and I cried doing that it was not something I wanted to do, but I knew that I couldn’t marry “the guy.” We were together for around a year and 3 months, and though he treated me like a queen, loved me, looked after me, and we had a lot of fun together.

I believe that the tug on my heart to write this story comes from seeing all the young ladies that are settling.

Settling for someone less than God’s perfect plan.

I’m not saying that guys who go to a different church, don’t hunger and thirst after God, and won’t come along with you.

Here’s the thing, though, you young ladies are valuable to God, you are his princesses. All of those things you don’t like about yourselves, all those reasons you have for thinking that this guy has to be the one, are they God things?

If you aren’t 100% confident that the guy you are with is the one you are supposed to marry, don’t keep going with him.

Try to imagine the guy asking you to marry him, does it freak you out? Would you be able to confidently say yes without one shadow of doubt in your heart? If the answer is no, run far away. If there is even a tiny little spot of doubt in your heart, let the guy go and trust God to find you the right man.

And the story continues. I am amazed by God’s faithfulness. I thought I would be heartbroken forever, but God took my heart and healed it rather quickly. Remember I broke up with “the guy” in March? Well, July 7 (of the same year!) Bernd (my husband) asked me out and I was able to say yes with a happy heart. We kind of just fell head over heels in love and he asked me to marry him on Oct 31 of the same year.  We got married the following June.(because I had to get married in summer-will never regret that)

Here’s the best part, I had no doubt when Bernd asked me to marry him that I should say yes. There was not even a pinpoint of doubt in my heart AT ALL.  Talk about God’s faithfulness. Now we have been married 11.5 years and I still have no doubt in my heart that this marriage was a God thing. 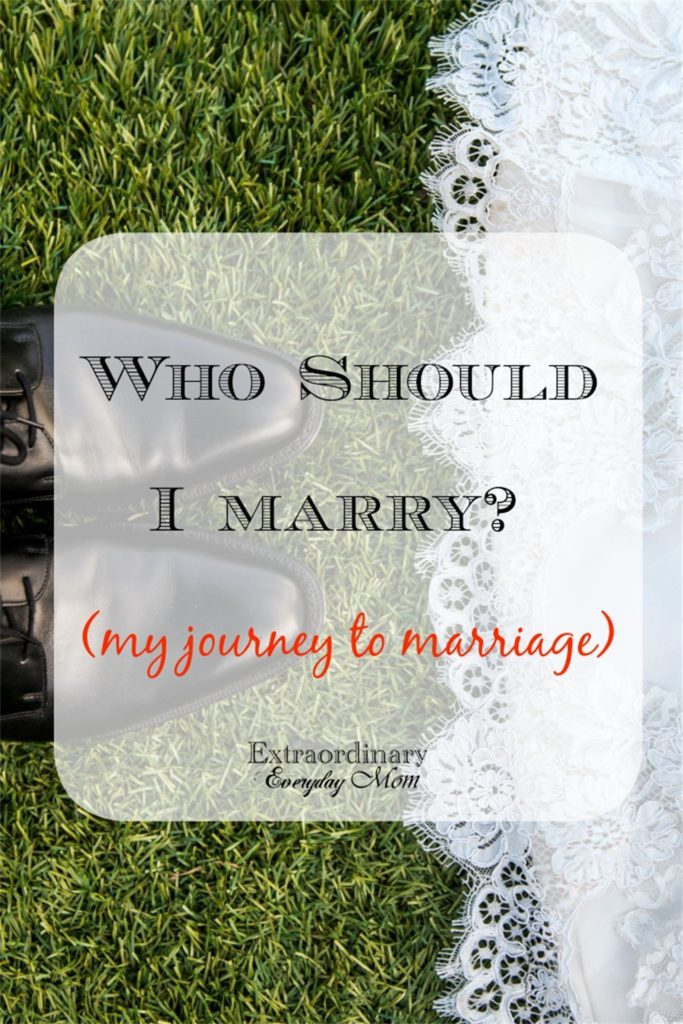