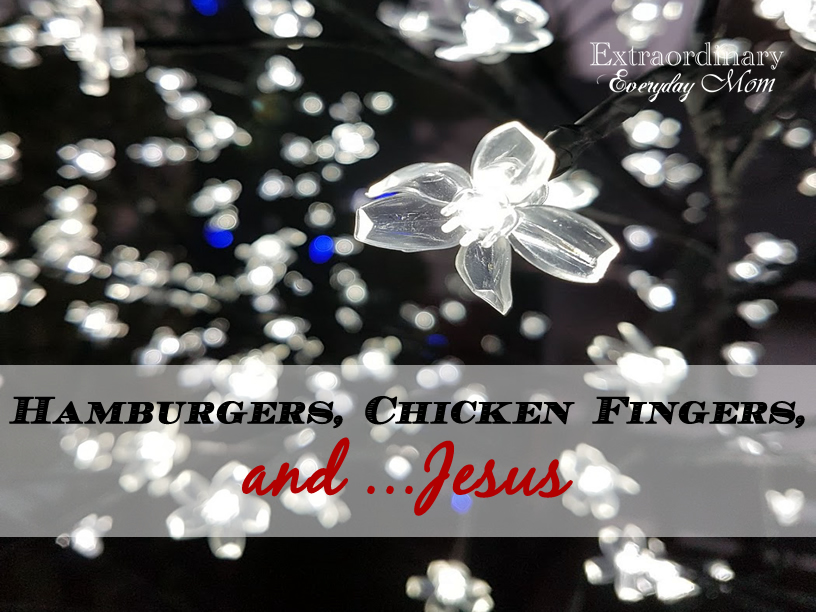 You might be wondering what exactly do Hamburgers and Chicken have to do with Jesus? In the following post, my husband Bernd will share exactly what he learned through those very things. Welcome back to the blog, sweetie. 🙂

Lately, I have been taking some trips to the city to take part in some training. My latest trip started out like any other. I was leaving work early, preparing a list of ‘to dos’, get a bite to eat and head off to evening training. Sounds simple, right? What I didn’t know was this trip would not be like my previous trips, not even close…

I had my itinerary all planned out. All the stops I would have to make, driving time, supper, and plan to arrive on time for the training. As far as planning was concerned, the plan was nearly perfect. But sometimes things don’t go according to plans, even the best-planned ones. Sometimes God intervenes. Sometimes we collide with destiny. Sometimes we have an encounter with Jesus.

I had just finished my last stop and was now off for a bite to eat. I stopped at a place I usually don’t eat at. That’s where I hesitated. Why was I hesitating? It’s just a place to eat. I had no clue I was about to have a run in with destiny, and destiny would not be denied – at least not that day. I finally opted to eat at a Wendy’s, a place I do like to eat at every once in a while.

I walked in the side door and turned right to go to the restroom. I took note of a couple that was sitting alone in that area of the restaurant. They were talking and eating their supper. I walked by them again as I returned and headed for the order line. I ordered my meal and proceeded to sit down and enjoy my evening meal. When I finished, I headed to the restroom once more before driving again. The couple was still sitting there but had now been joined by a third person. That’s when it struck me. These people had fallen on hard times, probably homeless and were sitting in the restaurant to seek some shelter from the cold. I looked at their tray and saw they only had one order of French Fries. Three people, sharing one order of French Fries, getting some relief from the cold outside.

Almost instinctively, I offered to buy them something more to eat. They were friendly people and didn’t want to impose on me. I offered again. That’s when they took me up on my offer and the two men followed me to the order line. The men ordered themselves each a hamburger and the lady wanted an order of chicken fingers. No combo meals, no drinks, just hamburgers and chicken fingers.

Matthew 25:34-36 (The Message) “Then the King will say to those on his right, ‘Enter, you who are blessed by my Father! Take what’s coming to you in this kingdom. It’s been ready for you since the world’s foundation. And here’s why: I was hungry and you fed me, I was thirsty and you gave me a drink, I was homeless and you gave me a room, I was shivering and you gave me clothes, I was sick and you stopped to visit, I was in prison and you came to me.’

Okay, I admit it. I realize that I did not have a direct encounter with Jesus. I will say though that the whole encounter had the hand of God all over it. The God of the whole universe, orchestrated an event on earth, for my benefit.

Every day, whether we realize it or not, we have opportunities just like I did. Opportunities to be Jesus to someone, or even where we encounter Jesus. Mine had a profound impact on me.

I am curious though, have you ever had an encounter such as this?  Would you briefly share it in the comments below?