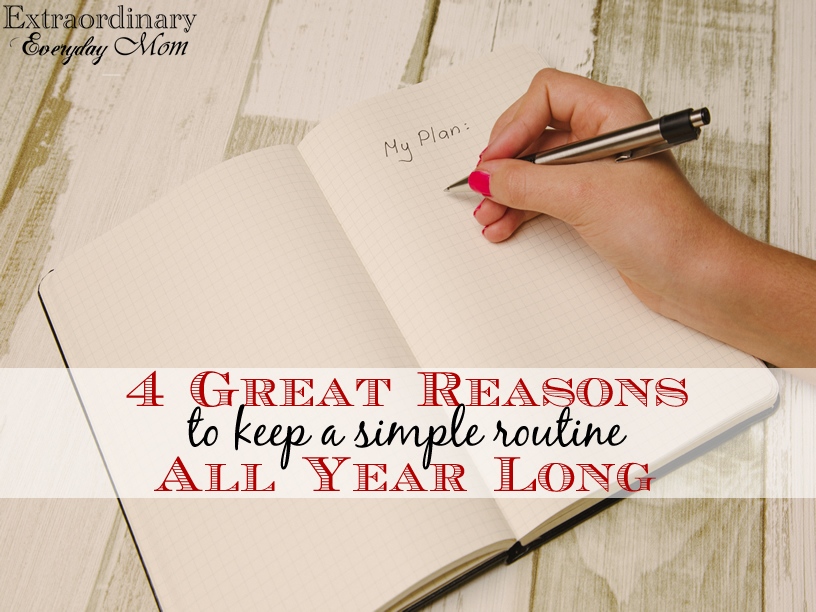 I used to LOVE making schedules. I made a lot of them in the first five years of being a mama. I will be honest, though, I never stuck with those schedules. If you’ve ever tried to make a schedule, you know that they tend to make life look like it will work really. That’s why I enjoyed making the schedules so much. I actually thought that I could make our lives work exactly as that paper said and it was exciting. Sadly, they don’t account for the baby needing a diaper change in the middle of read-aloud time or that your Mom might phone while you are doing laundry.

All that being said, I like to know what to expect each day. And children do as well. That’s why I decided to switch to a routine instead of a schedule.  I may just be a little bit of an organizational geek because routines make me happy. They make me feel relaxed, calm, and peaceful.

We stick to the Routine

We are a family that pretty much sticks to a routine all year long. It’s a simple routine. It means we do most of the same things one after the other, all day long. It means that we aren’t slaves to the clock and use it only as a guide. Yes, sometimes we go to bed late, but this doesn’t happen regularly around here,  even in summer. It usually happens only if we aren’t at home. I know that we aren’t the norm, as many parents let all routine fly out the window when summer comes. You might even think that we are mean parents and that our kids don’t get to have fun in summer. The truth is, we all like our routines and our kids have never felt left out. In fact, our 11-year-old recently told me that she doesn’t like to go to bed late. She had a hard time deciding whether she should go out with her Aunt to the city because she knew that she would get home really late. When we take our kids to fireworks on Canada Day, they find it very hard to stay up that late.

Today, I want to share some of the benefits we have found by keeping our routine all year around.

4 Great Reasons to Keep a Simple Routine All Year Long:

This Helps to Promote:

We aren’t perfect at this, but we usually eat our meals pretty much around the same time.

This way the kids know that we have one snack around 3 p.m. and don’t usually ask multiple times throughout the day. Does this always work perfectly? No, but as long as I consistently say no when they do ask at different times, they will go back to not asking in short order.

3. The Kids Don’t Suffer from Lack of Sleep Because Bed-time (usually) stays the same.

That being said, we do spend plenty of time away from home (especially as our kids have gotten older) and they do get to bed late at times. They usually tend to catch up by sleeping in a little bit in the morning. Our youngest doesn’t nap regularly, anymore, but will fall asleep if he is tired.

4.  You don’t have to Get Everyone Back onto Routine before School Starts

I don’t have much experience with this as we’ve always had a routine. Our kids don’t sleep in for the most part, even in summer, unless we’ve been out late a couple of nights in a row. For the most part, they know that breakfast happens around 7:30 a.m. and they are all up by then. I totally get that if you aren’t homeschooling, your children more than likely have to get up earlier than that, especially if they ride the school bus.

Well, that’s how we handle routine around here. What about you? Do you have a routine that you follow? Do you keep all the time? If not, tell us how you get back to routine. 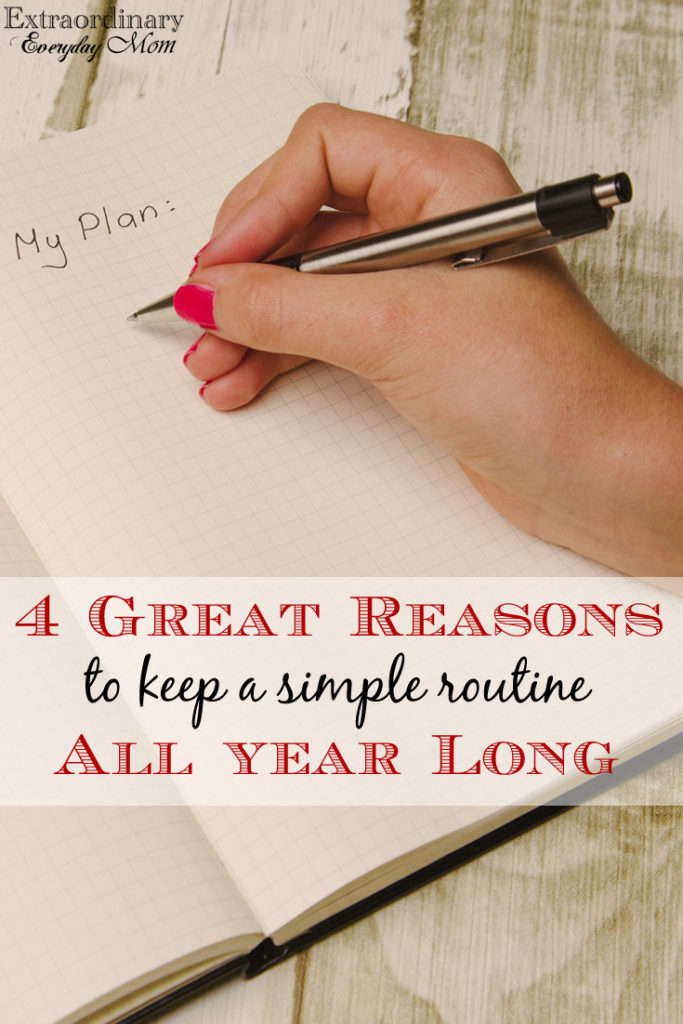