Have you ever wondered why, how, or when anyone ever gets around to budgeting? Well, my husband and I have now successfully budgeted for more than half a decade and we believe it is the biggest reason that we have been as successful in marriage and finances as we have. In this series, I will be covering not only why you should budget, but also how and when to budget. I know that this is a topic that isn’t always fun, but I think a necessary part of adulting.

Let’s get right to it.

Have you ever noticed that money kind of disappears whenever you have some?

I have. I have noticed that unless you are an extremely tight-fisted person, it doesn’t really matter how much money you have, it always seems to disappear and there is never enough.  As the saying goes, there is often more month left at the end of the money.

Sounds kind of hopeless, doesn’t it? Please read on…

Before our marriage, my future husband took on two very large things.

He bought a house and a brand, new car. When he did the math beforehand, it looked like it was completely doable. We then got married, within the year. (We weren’t dating when he bought the house or car. We did it all pretty fast!) Let’s just say, after getting married, we learned pretty quickly that his math was missing a lot of things. It didn’t matter that I was bringing another income into the situation, he had overextended himself. Of course, with us getting married, this also became my problem. Even though I was bringing another income into the marriage, I was also bringing another car payment in as well. We learned pretty quickly that we would have to become a one-car couple, so we sold my car. This helped things some, but it was pretty tight at our house for 5 years.

I have to admit that neither of us really had any idea of how to handle money. Thankfully, neither of us are huge spenders, so even though we got ourselves into some credit card debt, it could have been a lot worse if we had been big spenders.

Around 7 years ago, I heard about Dave Ramsey and “The Total Money Makeover” from an online friend. We ordered that book and both read through it. (If you are looking for a change in your finances, I highly recommend this book.) One of the many strategies that he recommends, (and the basis for everything else that he teaches) is to create a budget. He says to account for every dollar that you earn and spend. Within a couple of months of doing a budget, my husband and I started to actually be able to save some money, as well as becoming able to pay off debt, AND we started building an emergency fund. This was all without making a dime more on our pay cheques.

So why create a budget?

1. So that there is not more month left at the end of the money.

2. To give every dollar a name

3. To find money that is seeping out of the cracks of your spending habits.

5. Allow open communication in your marriage, instead of tension over money.

6. To plan ahead and count the cost of things.

Luke 14:28-30   For which of you, desiring to build a tower, does not first sit down and count the cost, whether he has enough to complete it? Otherwise, when he has laid a foundation and is not able to finish, all who see it begin to mock him, saying, ‘This man began to build and was not able to finish.’

It is important to be wise and plan ahead whenever we can.

7. So we can be faithful with what we’ve been given.

Matthew 25:21-22 His master replied, ‘Well done, good and faithful servant! You have been faithful with a few things; I will put you in charge of many things. Come and share your master’s happiness!”

It is important to be faithful with what we have.

These are just some of the reasons that I believe having a budget is very important. Please join me in the next several weeks for part 2 and 3.

If you enjoyed this content, I’d love if you’d take a minute to share it with a friend or via social media. 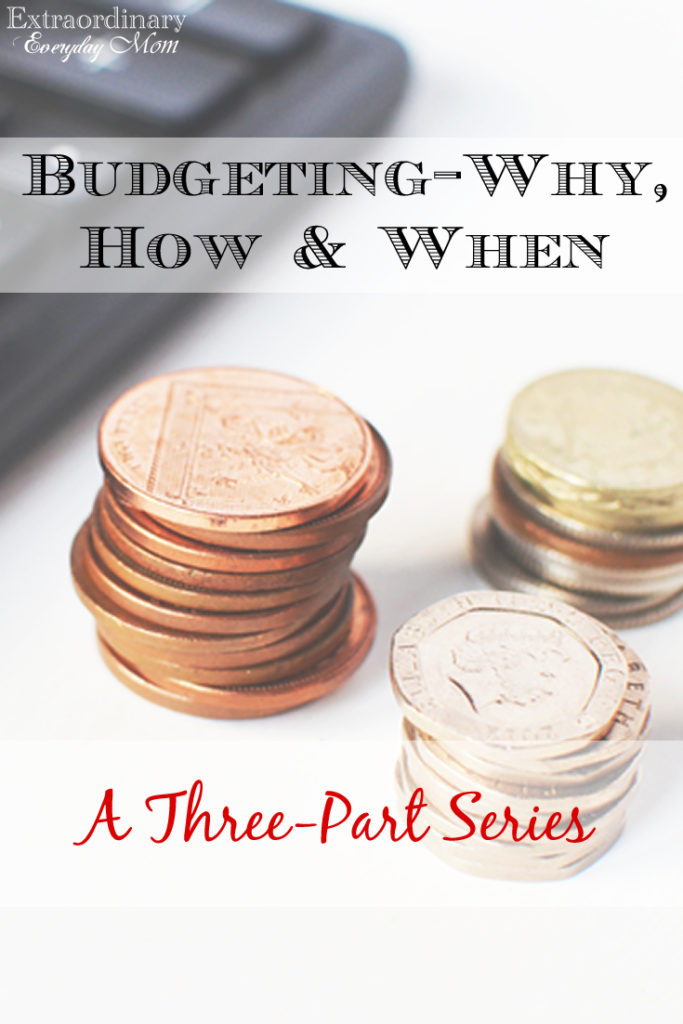